I have always considered The Screwtape Letters as my favorite of C. S. Lewis’s writings, but now I think that book might have to make way for The Great Divorce. I have just finished reading in and have found it to be even more insightful that Screwtape, though with none of the humor. The Great Divorce is a story about Heaven and Hell, perhaps similar in theme and intent to Dante’s Divine Comedy and others, though the Heaven and Hell that Lewis portrays is not much like the conventional pictures of Heaven and Hell. 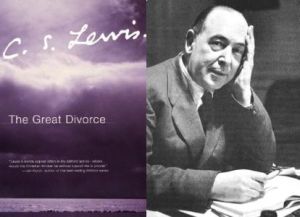 The Great Divorce begins with the narrator, presumably Lewis himself, in a gray, dismal, rainy city of empty streets. This is Hell. There are no flames, devils, or torments. These things might make Hell interesting and Lewis makes subtly makes the point that while evil may be hurtful, it is also, in the end, boring. The streets of Hell are empty, not because Hell itself is empty, but because the inhabitants cannot stand each other. As soon as anyone arrives in Hell, he invariably quarrels with everyone around him and moves as far away as he can. So, there are miles, even light years between neighbors.

There is a bus for those who want to travel to Heaven to see what it is like. The narrator, along with a group of quarreling travelers boards the bus to Heaven. Most of the people from Hell don’t much like it there. In Heaven, they are revealed to be ghosts, while Heaven is real and solid, more real and solid than Earth. The ghosts in Heaven cannot lift a single leaf. Grass does not bend beneath their feet. The people of Heaven are bright, shining spirits.

The bulk of the book consists of the narrator overhearing conversations between the ghosts and relatives or acquaintances from Heaven, and the narrator’s own conversation with Lewis’s favorite writer, George MacDonald.  The spirits of Heaven plead with the ghosts to stay but the ghosts all have one reason or another why they cannot or will not.  As MacDonald explains, the one thing that the people from Hell need to do is to forget about their preoccupation with themselves and learn to love God. Once they have ceased to trouble about themselves, they will become more truly the individuals they were meant to be. But, they simply will not do it.

Lewis is careful to be sure that the reader knows that this book is only a work of fiction and most emphatically does not claim to be any sort of prophet or to have any real knowledge of the afterlife. In fact, the story ends with the narrator waking from a dream. Still, I think The Great Divorce shows a great deal of insight into the nature of Heaven and Hell, and of good and evil.

I am not really a fan of the For Dummies books because I am not a dummy. Actually, I find the user-friendly features like the sidebars and the little icons to be a little distracting. I suppose I am old fashioned and am used to receiving my information in a more linear fashion.
Nevertheless, as a casual fan of C. S. Lewis, I was looking forward to reading Richard Wagner’s C. S. Lewis and Narnia for Dummies. I have to say that I was not disappointed. By a casual fan, I meant that I have read and enjoyed The Chronicles of Narnia, The Screwtape Letters, and Mere Christianity, and that I had a vague idea of the general outlines of Lewis’s life. Reading C. S. Lewis for Dummies made me appreciate Lewis’s life and works even more and made me determined to read some of his books that I was hardly aware of before.

Wagner begins the book with a general overview of C. S. Lewis, and devotes two more chapters to Lewis’s life and his literary friends, the Inklings. He moves on to Lewis’s fiction spending a lot of time,  about six chapters, on Narnia, giving a synopsis of the plots and characters of the Chronicles and exploring the deeper meaning of the themes of the series.  He spends perhaps too much time on the Chronicles of Narnia, to the detriment of Lewis’s other works. Still, with the movies coming out, perhaps that is the main reader interest.

Wagner goes on to explore Lewis’s other fictional works, with a chapter on The Screwtape Letters, The Great Divorce, the Space Trilogy, A Pilgrim’s Regress, and Till We have Faces. He next moves on the Lewis’s non-fiction with a chapter on The Problem of Pain, Mere Christianity, The Abolition of Man, and other books. Wagner doesn’t spend as much time on Lewis’s nonfiction, which to me is unfortunate, since these are the books by Lewis with which I am least familiar. He has, however, written enough to interest me in reading them.

I think that C. S. Lewis and Narnia for Dummies has something for any reader of C. S. Lewis. Whether you are just starting to read one of his books, or a long time fan, you are sure to learn something new from Wager’s book and to finish it with a deeper appreciation and understanding of Lewis and his beliefs.

Where angels fear to tread. C. S. Lewis always acknowledged that his Screwtape Letters presented a lopsided picture of human life that ought to have been balanced by letters from an archangel to a guardian angel. Yet, he felt himself unable to write such a balancing book. As Lewis put it,

But who could supply the deficiency? Even if a man-and he would have to be a far better man than I- could scale the spiritual heights required, what “answerable style” could he use? For the style would really be part of the content. Mere advice would be no good; every sentence would have to smell of Heaven.

Jim Peschke might perhaps be thought a fool for trying what a master like Lewis feared to attempt. He suffers from at least two disadvantages that should make a book like The Michael Letters a failure. First, Peschke, by his own admission, does not have the satirical wit of Lewis and is only a novice writer. Second, human nature being what it is, is more attracted to the darkness than to the light, and so the diabolical is inherently more interesting than the angelic.  Despite these disadvantages, The Michael Letters succeeds beyond all expectations. The correspondence between the guardian angel and the archangel holds the attention of the reader and the story moves along briskly. If this book does not quite come up to the level of The Screwtape Letters, it more than satisfies. 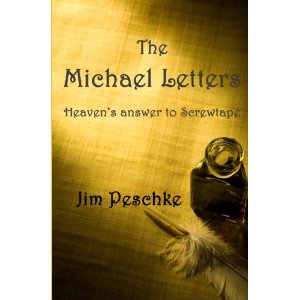 There are, of course, fundamental differences in the two works. The angels, unlike the demons are genuinely interested in the welfare of the human in their charge. Peschke shows this by giving the human a name and including details of his everyday life. Screwtape and Wormwood did not care about any such details. Their “patient” was simply food to them. The whole flavor of the correspondence is entirely the opposite. Unlike the demons who hate and mistrust each other, the angels willingly help and encourage their fellows. These and other differences make The Michael Letters a fitting counterbalance to The Screwtape Letters.

There is really not much I can add to all of the commentary on this spiritual classic by C. S. Lewis. I imagine that nearly everyone knows at least the premise, a series of letters by the experienced demon Screwtape to his nephew, Wormwood, the inexperienced tempter.  The Screwtape Letters is my personal favorite of Lewis’s books, even more so than the Chronicles of Narnia.

I must confess though, that I find reading The Screwtape Letters a slightly frightening experience. I keep imagining my own tempter sitting on my shoulder, writing glowing letters about his success in guiding his “patient” to Hell.