Early in his tenure as Attorney General, Eric Holder called his fellow Americans cowards for not talking candidly enough about matters of race. The reason for this supposed cowardice is obvious enough since any departure from liberal, politically correct orthodoxy results in immediate accusations of racism. In fact, any departure from liberal, politically correct orthodoxy on any subject may result in such accusations, as members of the Tea Parties, generally more concerned with fiscal matters than social or racial, have discovered.

Harry Stein is brave, or foolish, enough to start this conversation about race in his latest book, No Matter What… They’ll Call This Book Racist. Unfortunately, the title, which he adapted from a famous sign at a Tea Party rally, will turn out to be accurate, as one can see from reading negative reviews of this book. Undaunted, Stein examines the myths regarding such topics as affirmative action, the collapse of the family in the Black underclass, and other issues that need to be discussed openly and honestly, but almost never is. 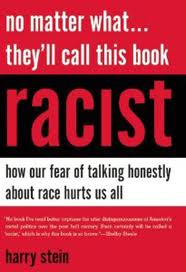 It is all standard Conservative fare, and familiar to anyone who has read Thomas Sowell or Shelby Steele, though Stein makes the case better than most. The book has less of the humor of his two previous books, but this is a more serious subject. The problem is that the people who most need to read a book like this, the sort of guilt-ridden White liberals and up and successful African Americans who might agree with most of what Stein actually says, will simply dismiss it as racist without getting past the first page.

Still, there is cause for optimism. Charges of racism increasingly ring hollow as liberals have overplayed the race card to intimidate opposition. There is a growing number of Black Conservatives.  People across the political spectrum are more aware and more willing to admit that the old platitudes about race just don’t work anymore. Maybe No Matter What will make an important contribution to opening up a real conversation.