I have noticed that US history textbooks tend not to spend a lot of time on the Colonial Period. Generally, there is a chapter on Columbus and the Spanish Conquistadores, followed by a chapter on Jamestown and the Pilgrims. By the third or fourth chapter, they are at the Boston Tea Party and the Revolution, effectively skipping over the hundred and seventy or so years of the English colonies in North America. At least that was the situation when I was in school. Today, I suppose the textbooks teach about the evil whites who oppressed and exterminated the innocent Native Americans who lived in harmony with the Earth and each other.

This habit of skipping over so much of the Colonial Period is unfortunate, I think, since quite a lot happened during that time. The almost two centuries before Independence was the time in which the English colonists became Americans and learned the arts of self-government that served them so well during and after the Revolution. The colonists were forced to learn to govern themselves because England mostly neglected its North America colonies until the French and Indian War. Unlike the Spanish and the French, the English government did not exert much control over the internal affairs of its colonies and didn’t limit colonisation to approved populations. The English thought of their colonies as a source of resources, a place for adventurers to get rich and a dumping ground for undesirables. The royal governors who were appointed tended not to be the best and brightest of the English aristocracy.

The colony of New York seemed to have the worst luck with its governors. Probably the worst of the lot was Edward Hyde, the Third Earl of Clarendon. Hyde was reputed to be corrupt, incompetent, dissolute and a cross dresser. Hyde was appointed to be the Royal Governor of the colonies of New York and New Jersey by Queen Anne from 1701 to 1708. He was not a popular governor. According to some accounts, Hyde took bribes and stole from the public treasury, and he dressed in women’s clothes.

There are several stories about Hyde’s cross dressing. According to one, a constable noticed a woman loitering in one of the seediest parts of New York and arrested her on suspicion of being a prostitute only to discover he had arrested the governor. Another story, has Hyde addressing the New York Assembly in 1702 in a gown reminiscent of the style Queen Anne preferred. When questioned about his choice of attire, he replied that in his capacity as Royal Governor he represented the Queen, a woman, and so he ought to represent her as faithfully as possible. When his wife died in 1707, Hyde is said to have attended her funeral dressed as a woman. There is even a portrait purported to be of the the governor in drag. 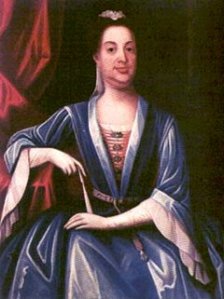 There is, of course, some question over whether this is really a portrait of Hyde. One might think that since any politician wouldn’t allow himself in our more liberated times to be photographed in drag, surely no one in the more restrictive eighteenth century would sit in front of a painter to have his portrait done while wearing a dress.

Actually, the idea that our times are more sexually liberated while all past eras were prudish and puritanical is not really true. The truth is that  periods of relatively liberal sexual mores alternate with more restrained times. The eighteenth century happened to be one of the more libertine centuries, at least among the aristocracy. The more prudish Victorian nineteenth century was a reaction against the looser morals of the previous century, just as much of the twentieth century has been a reaction against the Victorians. In fact, there was even a lively gay subculture in London and perhaps other large cities of Britain, complete with gay bars, which they called “molly houses” In eighteenth century slang, a “molly” was an effeminate, perhaps homosexual, man and a molly house was where they could congregate for companionship and sex with their more masculine lovers. They would dress as women and take on feminine identities. They even held mock marriages just as homosexuals today have mock marriages. These marriages were, of course, not recognized by the state as such mock marriage often are today. In that respect, the people of the eighteenth century were saner and had a better grip on reality. You must not think that homosexuality, or cross-dressing, was in any sense tolerated, though. Sodomy was a crime punishable by death. Most of what historians know about the molly houses is from court documents of trials persons captured in raids and the testimony of undercover police.

So, was Edward Hyde a molly? Did he frequent the colonial equivalent of a molly house, if any existed? Probably not. There is no reason to believe that he was a homosexual, and really no reason to believe the stories of his cross dressing. Upon closer investigation, the stories seem to have originated from his political enemies, of which he had made many, and to have dated some time after his tenure as governor. They always seem to have been something someone else had seen or heard about the governor. Even the supposed portrait of the governor is more likely to have one a painting of a woman with masculine features. The label on the frame of the portrait may only date to 1867. Even if Hyde did wear women’s clothing, he was probably heterosexual. Contrary to what is still often believed, most cross dressers are straight, and Hyde seems to have been genuinely fond of his wife. The stories of his corruption may also have been exaggerated by his enemies.

Edward Hyde was recalled to England in 1708 and promptly put into debtor’s prison, until his father died the following year and he inherited the title and properties of the Earl of Clarendon. He died in obscurity in 1723 and since his son had already died, the title passed to a cousin, Henry Hyde, Fourth Earl of Clarendon. The title died with his son, Henry Hyde, who died childless in 1753, but it was revived in 1776 with a son of a daughter of the Fourth Earl. Edward Hyde’s descendants include the present Earl of Clarendon, Sarah, Duchess of York, and the actor Cary Elwes. Edward Hyde himself is only remembered for his alleged cross dressing, perhaps not the legacy he might have wanted, but how many colonial Royal Governors are remembered at all?