Scott Adams, the creator of the Dilbert cartoon strip, believes that he has been targeted because of his blogging about Donald Trump.

This weekend I got “shadowbanned” on Twitter. It lasted until my followers noticed and protested. Shadowbanning prevents my followers from seeing my tweets and replies, but in a way that is not obvious until you do some digging.

Why did I get shadowbanned?

But it was probably because I asked people to tweet me examples of Clinton supporters being violent against peaceful Trump supporters in public. I got a lot of them. It was chilling.

Late last week my Twitter feed was invaded by an army of Clinton trolls (it’s a real thing) leaving sarcastic insults and not much else on my feed. There was an obvious similarity to them, meaning it was organized.

At around the same time, a bottom-feeder at Slate wrote a hit piece on me that had nothing to do with anything. Except obviously it was politically motivated. It was so lame that I retweeted it myself. The timing of the hit piece might be a coincidence, but I stopped believing in coincidences this year.

All things considered, I had a great week. I didn’t realize I was having enough impact to get on the Clinton enemies list. I don’t think I’m supposed to be happy about any of this, but that’s not how I’m wired.

Scott Adams has not identified himself as a Trump supporter until recently, when he decided that Clinton’s proposal for a confiscatory estate tax was sufficient reason to endorse Trump. Evidently, just writing positively about Trump’s persuasion skills was enough to get him condemned as a thought criminal. I imagine that next there will be petitions to newspapers to drop Dilbert. If Hilary Clinton gets elected, Adams may find his tax statements being audited by the IRS every year for the next four to eight years.

We are not dealing with normal people here. Whether you call them Social Justice Warriors, Politically Correct,Liberals, or Progressives, these are not sane, normal people with an interest in politics. These are fanatics. Normal people do not launch into a tirade about racial oppression and try to get a Lyft driver fired when they see a stupid hula dancer bobblehead. Normal people do not report a classmate to a Gender Bias response team when he makes a joke in his Chinese class about being handsome nor do normal, sane people prepare lists of forbidden phrases for incoming college freshmen, sorry freshpeople, or spend their time writing fake reviews for Amazon and getting people banned from social media.

These people are fanatics, bullies, digital Brownshirts who like to push people around and who are not in the least willing to act with tolerance or civility. They often say that they support diversity, and perhaps in their own way they do, but they are not interested in diversity of opinion. You cannot reason with these people or appease them. They always want more concessions. You can only stand up to them and fight them. Then, like most bullies, they will seek out easier targets.

Fortunately, Scott Adams is already a successful cartoonist and author, so it is not too difficult for him to stand up to them. It isn’t much of a loss for him if he loses speaking fees because of a perceived support for Donald Trump. Still, even those of us who are not so well situated need to stand up to these bullies and let them know that this sort of totalitarian behavior is simply unacceptable in a free country. Otherwise, we won’t be living in a free country much longer.

Gleichschaltung is a German word which means something like coordinating or bringing into line. This word was used by the Nazis to describe the process of bringing everything in Germany under the control of the Nazi Party. The ideology of the Nazis, or National Socialists, was socialist but unlike the socialism, or Communism of Marx and Lenin, the Nazis and Fascists emphasized national unity rather than the international class struggle. In this, Hitler and Mussolini were perhaps more shrewd observers of human nature than Marx or Lenin since it is more natural for human beings to identify according to nation or tribe than by class.

In any event, the whole idea of Gleichschaltung was that every German should be pulling together in the same direction. The whole German population should behave not as individuals with their own concerns but as the German nation with everyone cooperating toward the common goal of restoring German greatness. Every citizen should act and think as one. Naturally, there was little room for those Germans who happened to dissent from the common goal and still less for those people who weren’t really German, those Jews and others.

All of this may seem to belong to the past, yet I have noticed something very similar happening here, an American Gleichschaltung, albeit on a very small scale, so far. I have written before about people who have dared to dissent from politically correct orthodoxy and have paid the price. Recently these have included the president of Chick-Fil-A, Phil Robertson, Brendan Eich, and others. If you are a conservative Christian who believes in the rational definition of marriage, you can now expect to be silenced. Same sex marriage isn’t the only issue in which no dissent is permitted. Cliven Bundy dared to depart from the script on racial matters and was universally denounced as a racist, even though a transcript of his actual remarks shows that he did not advocate slavery for Blacks nor did he say that they were inherently inferior. He questioned the efficacy of many current liberal policies on the African American community. That was enough to ostracize him.

The latest victims of this American Gleichschaltung are the Benham brothers. These two men renovate homes and until recently were going to have a  show on HGTV. Their show has been cancelled because they proved to have extremely offensive beliefs that have no place on television or anywhere else in public. To learn about these extreme beliefs, read this article in the Washington Times. I warn you, you may be offended.

amid outcry from liberals about the brothers’ Christian, conservative views.

The series, “Flip it Forward,” has been the target of criticism ever since an article was published on a liberal activist website, Right Wing Watch, claiming hosts David and Jason Benham have a history of speaking out against gay marriage, abortion and divorce, the Daily Caller reported.

The article accused David of being a “right-wing activist in the mold of his father, Flip Benham,” an evangelical minister who heads the anti-abortion-clinic protest group Operation Save America.”

It also said that David Benham led a prayer rally in Charlotte during the Democratic National Convention and spoke out against gay marriage.

: “HGTV is currently in process of reviewing all information about the Benhams and we will provide an update as soon as possible.”

On Thursday, the network

tweeted: “HGTV has decided not to move forward with the Benham Brothers’ series.”

David and Jasonsaid in a statement that they are “saddened to hear HGTV’s decision.”

“With all of the grotesque things that can be seen and heard on television today you would think there would be room for two twin brothers who are faithful to our families, committed

to biblical principles, and dedicated professionals,” the statement read. “If our faith costs us a television show then so be it.

“Anyone who suggests that we hate homosexuals or people of other faiths is either misinformed or lying,” they said. “Over the last decade, we’ve sold thousands of homes with the guiding principle of producing value and breathing life into each family that has crossed our path, and we do not, nor will we ever discriminate against people who do not share

That is not enough. It is not enough merely not to discriminate against people. Under the New Order you must fully and enthusiastically accept every aspect of correct left-wing ideology, or pay the price. Every American must think and act as one if we are to be free.

Maybe that is because there is persecution and discrimination here.

So far, the American Gleichschaltung  has not been nearly as bad or pervasive as the Nazi version. It has been just a matter of bullying by interest groups and the government hasn’t yet taken a hand in it. Yet, how long before there is actual persecution and discrimination against dissidents, particularly conservative Christians? Recent revelations of the illegal and unconstitutional activities of such agencies as the NSA and IRS, and no doubt others suggest that the idea may not be so far-fetched or paranoid as it may seem.

Neither does Ben Shapiro and neither did his mentor Andrew Breitbart, which is probably why Breitbart devoted his like to exposing the biggest bullies of all the contemporary Left, and why Shapiro continued his work by writing Bullies: How the Left’s Culture of Intimidation and Fear Silences Americans. 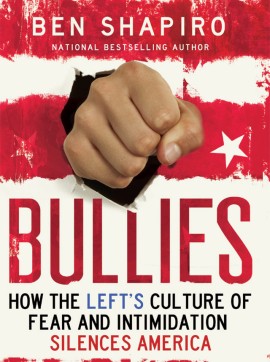 In Bullies, Ben Shapiro describes in exacting detail how the Left uses bullying tactics to shout down and silence all who oppose them. He tells how Leftist bullies in government, in the media, on the university campus, and elsewhere use their position and power to force their viewpoints on people. He writes how liberal bullies in politics use the nastiest and slimiest personal attacks against conservatives to get their way, and then blame the conservatives for the incivility in politics. Green bullies want you to be poor to save the Earth. Secular bullies want to forbid you from praying in a public space. Race and class bullies want to pit Americans against each other. Anti-patriotic bullies want you to be ashamed of your own country. The entire Left is composed of bullies who want to tell you what to do. If you don’t like it, than sit down and shut up.

Luckily, Ben Shapiro is able to relate these stories of the power hungry, bullying Left with a sense of humor. Otherwise, this book might be painful to read. As it is, he writes with just the right, slightly mocking touch that makes his book actually fun to read. Like all bullies, the Left does not like to be laughed at and maybe more books that are humorous will help to put them in their place.

Ben Shapiro concludes Bullies with a rousing appeal to his readers to pick up Andrew Beitbart’s mantle and continue the fight against the thugs and bullies of the Left. Bullies who are unchallenged only get worse so if we want our descendants to live in a free country, we have no choice but to fight them.

By the way, if there is any doubt that Leftists are nothing but bullies, check out the one-starred reviews of this and other conservative books. There seems to be a clique of people who have nothing better to do, they probably collect unemployment, but to publish nasty reviews of books they have not read. Typical.