I got this meme off of Facebook. I think it originally came from the left-wing blog Daily Kos. 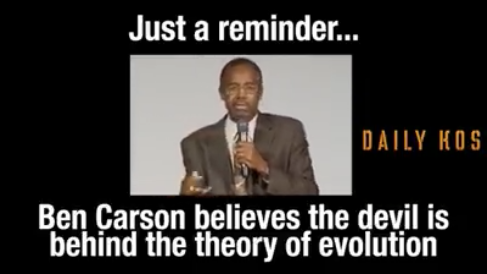 Why is this an issue in any presidential campaign? Since the duties of the President of the United States do not include teaching a science class, how is any candidate’s opinion on the theory of evolution particularly relevant? I would be more concerned with a candidate’s opinion on the theories of Marx than of Darwin. Marx’s ideas have contributed to the murder of millions and has caused more misery than any opinion on evolution ever has, yet candidates with ideas derived from Marx never seemed to be questioned by the media. The fact that Bernie Sanders calls himself a socialist or that Barack Obama had as mentors such left-wing Marxist radicals as Bill Ayers and Frank Marshall Davis seem to me to be of far more concern than Dr. Ben Carson’s thoughts on evolution.

I suppose that the people at Daily Kos would argue that Dr. Carson’s beliefs about evolution disqualify him for the presidency because they show that he is anti-science. If that is the case, that Carson really is against science, what do they imagine he will do as president? Cut all funding for research? Insist that universities that accept federal funds teach creationism? Even if he wanted to do this, and there is no indication that he did, President Carson would find it very difficult to impose creationism on the scientific community. The President of the United States is not a dictator, at least not yet, and cannot single handedly control the education policies of the entire country. I think that science is safe from a president who does not believe in evolution.

But is Ben Carson really anti-science? For that matter are creationists really anti-science? They certainly do not believe that the theory of evolution is a valid explanation for the origin and adaptation of life on Earth and they disagree with current ideas about the age of the planet and the universe, but is this being anti-science? According to the New Oxford American Dictionary, the definition of science is:

The intellectual and practical activity encompassing the systematic study of the structure and behavior of the physical and natural world through observation and experiment.

Science can also mean “an organized body of knowledge on a particular subject”, so one might argue that Dr. Carson and creationists  are not knowledgeable in the sciences of biology and geology but that is not the same as saying that they are anti-science in the first sense. In fact, hardly anyone is actually anti-science in the sense of being against the systematic study of the structure and behavior of the physical and natural world. Even people people espousing wildly unscientific ideas try to assume the mantle of science. Creationists like to say they have scientific evidence for their position, even when it really boils down to, “The Bible says it”. Disbelief in evolution does not necessarily imply disbelief in the scientific process.

The real importance of evolution to the left does not seem to be its status as a scientific hypothesis subject to falsification but as a means to differentiate between the elite intellectual elite and the bitter clingers in flyover country. To them, belief in evolution is a sign to show that you are on the right side of science and history. It, along with climate change is sacred knowledge, not to be questioned or doubted. By demonstrating a disbelief in evolution, Dr. Carson shows that he is lacking in intelligence and should be disqualified from the presidency.

The irony here is that Dr. Ben Carson is probably a good deal more intelligent and educated than the person who put together that meme. He is certainly more accomplished, being a gifted neurosurgeon. It is even possible he is more scientifically knowledgeable, even about evolution. I wonder how much that that person who created that meme really knows about the theory of evolution or can explain why it is accepted as an explanation for the development of life by nearly every scientist knowledgeable in the relevant fields. I would guess that he believes in evolution because it is what was taught in school and that it is what all of the smart people believe. Well, that is not the same as actually investigating the matter for oneself and actually trying to understand why a given theory is believed to be true. You don’t get to give yourself credit for being in the intellectual elite for simply remembering what you learned in school twenty years ago and you don’t get the right to sneer at people better than yourself.