In earlier times people were afraid of comets. A comet in the sky was seen as a sure sign that impending disaster. It is not too difficult to understand why people would feel that way. Other heavenly bodies, such as the stars and planets move in predictable ways. The Sun rises and sets the same way every day. The Moon goes through its phases. The planets move across the background of the fixed stars. Eclipses were no doubt terrifying, but astronomers learned to predict them in ancient times. Comets, however, seemed to appear out of nowhere then disappear just as quickly. No one could tell what path they would take across the sky. Even the appearance of a comet inspired fear. The Sun and Moon looked circular and the stars and planets were points of light. A comet had a long tail streaming from it. To some the tail might look like a sword indicating divine displeasure with the inhabitants of the Earth. In any case, comets looked and acted like no other object in the heavens and that was enough to worry people.

It wasn’t until the eighteenth century that some of the mystery surrounding comets began to be dispelled. The astronomer Edmond Halley had come to believe that comets had to obey the same laws of gravitation discovered by Isaac Newton as any other object in the Solar System and beyond. He reasoned that comets orbited the Sun like the planets but they had to have extremely elongated elliptical orbits so that they would only come close enough to be observed after many years, perhaps centuries. Halley also noticed there were comet sightings approximately every 75-76 years apart and theorized that they were sightings of the same comet. He predicted that the comet, now called Halley’s Comet would return in 1758. Halley died in 1742, so he didn’t live to see his prediction come true, but his efforts showed that a comet was simply another celestial object with a motion that could be predicted, like any planet. There was nothing to fear from a comet.

Since Halley’s time, astronomers have come to learn more about comets and just this month the Philae lander from the European Space Agency’s Rosetta probe became the first man made object to land on a comet. The Rosetta probe itself was the first probe to actually orbit  a comet. This should be a proud moment for the European Space Agency and for Project Leader Matt Taylor. Instead, Dr. Taylor has found himself in the middle of a controversy and has been forced to make a tearful apology, because he wore the wrong shirt.

He helped mankind land on a comet, but Dr Matt Taylor may end up being remembered for his risqué sartorial judgement rather than his scientific acumen.

The space scientist broke down in tears today and apologised for wearing a gaudy shirt which featured cartoon images of women wearing bondage gear and firing guns.

During a press briefing this afternoon on the progress of the Rosetta mission, Dr Taylor, the lead scientist, appeared visibly upset and struggled to speak.

Eventually he said: “I made a big mistake and I offended many people and I am very sorry about this.”

Dr Taylor received a reassuring pat on the back from Andrea Accomazzo, the Rosetta flight operations director, as he went on to describe the current state of the mission.

In recent days the heavily-tattooed London scientist had become a firm favourite with the public for his unlikely appearance and enthusiastic interviews.

But the shirt has divided opinion, with many women in the science community accusing Dr Taylor of sexism.

Astrophysicist Katie Mack said earlier this week “I don’t care what scientists wear. But a shirt featuring women in lingerie isn’t appropriate for a broadcast if you care about women in science” 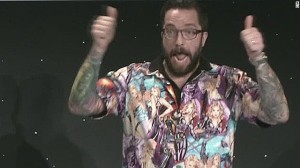 Maybe the shirt is in poor taste, but so what? This man landed a probe on a comet. Surely that is more significant than his sartorial choices. After all, no one expects scientists to be fashion plates. What sort of person in their right mind is offended by this? Why do they conclude that Dr Taylor is sending some sort of misogynist message against woman in science? WHy can’t they seem to understand that this might simply be a shirt he happens to like?

With these sort of busybodies, nothing can ever be simply a personal preference with no great cultural message. No act can be a neutral one devoid of political meaning. No one can be a bystander or aspire to simply live their own life and mind their own business. You are either for social justice or against it and Gaea help you it you are perceived to be against it. These people are bullies and totalitarians, the worst sort since they are convinced in their minds that they are eternally on the side of the angels.

I think that Dr Taylor has done us all a great disservice by apologizing for offending people. He has nothing to apologize for and making apologies only enables the bullies. Instead of apologizing, we need to start telling them where they can stick their perpetual feelings of victimization.