If anyone wonders why I tend to support the State of Israel over its enemies then they should read this story from Israel Hayom which I found courtesy of Jihad Watch.

Israel Defense Forces troops brought a wounded Syrian couple to Poriah Hospital near Tiberias Thursday night. The couple, residents of the embattled town Daraa, arrived with gunshot wounds in their legs. The male is 27 years old and his wife is 23 and in the early stages of pregnancy.

While the two did not have life threatening wounds, the two have been through an immense amount of duress recently: Two months ago, the couple lost their daughter two weeks after she was born. “Because of the gunfire and the siege on our town in the Daraa area, we were left with no choice but to deliver the child at home — and the medical condition of my baby deteriorated,” the woman told Israel Hayom. “All our pleading at the [Syrian] army checkpoint to go to the hospital did not help. We went back home and our daughter died there.”

Eight days ago, the couple was struck with another tragedy. Their village came under attack, “artillery bombardment, gunfire, and planes bombing from above,” the woman said. “In the evening my brother came and took us, my mother and two other wounded people and we tried to flee the village. During our exit from the village we were fired on by the army and my brother was killed before my eyes. We managed to escape back to the village and were treated in a field hospital. But the wounds got worse — until my cousin took us to the border and we got into Israel for treatment,” the woman said. Her brother, 19, fought with rebels trying to topple Syrian President Bashar Assad’s regime.

Currently the couple remains hospitalized, both in the same room. The woman is struggling with being away from her family, but admitted that she did not expect such friendly treatment from her enemy. “We were surprised by the treatment and dedicated medical care we got in Israel,” she said. “We hesitated coming to Israel, because we were taught to hate it. We were taught this is a brutal enemy state, but we learned that reality is different. People here have a conscience. Our enemy is in Syria, not in Israel. If only we could stay here.”

The couple were not named in the article and their faces were concealed in the photograph. I suppose it would not be safe for them if it were known that they spoke well of the enemy. 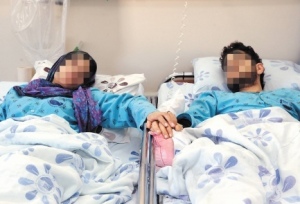 What would have happened to a wounded Israeli if he fell into the hands of any of Israel’s enemies? Maybe, he would be given medical treatment, and maybe not.  Judging from the recent, and not so recent history of the region, it would be foolish to expect decent behavior from the people of the region, they have been taught to hate their perceived enemies for so long. Israel is the only country in the Middle East where human rights are respected and the only country where you can expect people to act decently. The Israeli are a civilized people and Israel’s enemies are barbarians. I am going to support the civilized people over the barbarians every time.

That is what Joshua Black, a Republican candidate for the Florida House of Representatives seems to think we should do. He responded to a tweet calling for President Obama’s arrest and execution by adding the word “agreed”. Here is the story from World Net Daily.

A GOP candidate for the Florida House of Representatives is under fire from his own party and said he’s been visited by the Secret Service after he tweeted Monday that President Obama should be hanged for treason.

Chris Latvala, a Republican candidate for House District 67, shot back: “You aren’t seriously calling for the killing of Obama are you? I know you are crazy but good heavens. U R an embarrassment.”

Latvala responded, “I make it my business when so called GOP candidates become an embarrassment to my beloved party. You need to go take your medicine #TinFoilHat #Crazy.”

Black later expounded on his comments – even going so far as quoting Jesus – in a Facebook posting, saying:

“To everyone who was offended that I said that the POTUS should be hanged for treason. This is the man who droned al-Awlaki on ‘suspicion of terrorism’ – not proof – and later killed his 15-year-old son for nothing more than being his son. …

“This would be exactly what the president has done to others, and, as Jesus said, ‘the measure ye mete, it shall be meted to you again.’ I make no apologies for saying that the president is not above the People. If ordinary Americans should be executed for treason, so should he.

“So, don’t stop at impeachment. Remove him. Try him before a jury (the very right that he arbitrarily denied to al-Awlaki and his 15-year-old son), and, upon his sure convictions, execute him. Thus has he done, thus it should be done to him.”

Anwar al-Awlaki was a Yemeni-American Imam who was a recruiter for al-Qaeda and was linked to several terrorist attacks on the United States, including the Fort Hood shooter Nidal Hasan and the underwear bomber, Umar Farouk Abdulmutallab. Al-Awlaki was killed by a drone in 2011, an action that has been somewhat controversial since he happened to be an American citizen. There are a lot of issues that people might want to impeach Obama over, but killing suspected terrorist doesn’t come up too often, at least among conservatives.

I think having the Secret Service visiting Mr. Black is something of an over reaction, considering that he didn’t state that he, personally, would execute the president. The first amendment has not been repealed and I can’t imagine the Secret Servicemen  really believing that Black really represented a credible threat to the president.

I can understand how Mr. Black feels. I don’t approve of much that Obama has done during his tenure in the White House. All the same, I feel that this sort of rhetoric is not very helpful.  Judging from the comments in the story, I suspect that Joshua Black’s words will make him very popular in some quarters on the right, but we ought to consider just how they sound to people who are not immersed in politics or not strongly committed to either party.To be blunt, calling for the arrest and execution of the president for treason sounds crazy, and if people get the idea that conservatives or the Tea Party want to see Obama hung, it will make it much easier for the mainstream media to paint them as crazed extremists, not that the mainstream media has had any hesitation in describing the Tea Party in those terms. I think we should leave the insane political rhetoric and the death wishes for public figures to the liberals. One side in our divided country has to be the sane side.