The recent history of the country known as the Democratic Republic of the Congo is singularly melancholy, even by the depressing standards of colonial and post-colonial Africa. In 1885, King Leopold II of Belgium somehow managed to convince an international conference held in Berlin to give him control of the region that now makes up the Congo. He made the entire country into his personal possession and named it the Congo Free State. Without any necessity of dealing with a parliament or any other institution that might limit his control over his colony, Leopold hardly made any pretense of bringing civilization to Africa, as the other colonial powers did. The Congo Free State existed solely to enrich King Leopold with its rubber plantations, by the most efficient or brutal means possible.

The situation in the Congo became so notorious that in 1908 the Belgian parliament took control of the colony from Leopold. The Belgian government ruled the colony somewhat more humanely than King Leopold had but the Belgian colonial officials made no effort to prepare the Congolese for self-government. No African was placed in any position of authority. The colonial army had no black officers. Needless to say, when the Congo achieved independence in 1960, there was virtually no chance that the new nation would be governed in an effective or democratic way. In fact, there was considerable political unrest until Joseph Mobutu or Mobutu Sese Seko as he came to call himself, took power in 1965.

The only good thing that can be said about Mobutu was that he was not a Communist and so did not slaughter his people by the millions, as Communists invariably do. Unfortunately, Mobutu was dictator and a kleptocrat. He changed the name of the country to Zaire and pillaged it, filling his Swiss bank accounts from the Zairian treasury. Despite this Mobutu might have died in peace, had he not made it a habit to intervene in the internal affairs of Zaire’s neighbors.

Mobutu was overthrow in the First Congo War from 1996-1997. This war and the following Second Congo War which was fought from 1998-2003 is the subject of Dancing in the Glory of Monsters by Jason Stearns. 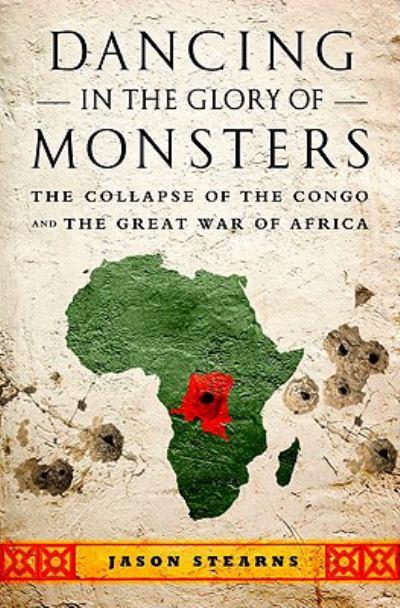 Stearns begins with the genocide in Rwanda that preceded and sparked the Congo Wars. After the Hutu massacred the Tutsis of Rwanda, Tutsi rebels took control of Rwanda and drove thousands of Hutus into neighboring Zaire. With support from Mobutu, the Hutus began attacking the Tutsis across the border. The Tutsis in response decided to overthrow Mobutu but assembling a coalition of southern African nations and arming Congolese, predominantly Tutsi, rebels. This first Congo War was a success as the rebels drove Mobutu from power and installed Laurent Kabila as the new president of the renamed Democratic Republic of the Congo.

Kabila turned out not to be very competent and the policies he favored seemed to be unchanged since the 1960’s. The Rwandans began to be exasperated with him, especially after he began harassing the Congolese Tutsis, so the Rwandans supported a new rebel movement against Kabila. Meanwhile, there was a falling out between the former allies Rwanda, Uganda, Zimbabwe, and Angola, and each nation supported its own movement in the Congo and fought over the natural resources of the Congo. This was the Second Congo War.

Jason Stearns writes the history of these two wars from the perspective of several participants in these wars and the aftermath. Some of these stories are from prominent players in the politics and fighting of the region, some are from people who were simply in the way. Dancing in the Glory of Monsters is not primarily a military history but a story of a disaster that has blighted the lives of millions of people in central Africa. Stearns writes of mass murders and refugees as much as he does of troop movements and political deals, leaving the reader with a true appreciation of the scope of the suffering these wars brought.

The fighting in the Congo is mostly over now. Joseph Kabila, the son of Laurent rules the Congo and has proved to be a relatively effective leader, though one reluctant to create the kind of institutions the Congo needs. The suffering of the Congolese people continues as they try to rebuild their wrecked country. Still, as Stearns points out in the end of his book, they have an indomitable spirit and may yet overcome the bad hand history has played them.