I suppose in the broadest philosophical sense none of us can really know what the truth is. Still, as far as specific facts go, it is sometimes easy enough to discover the truth. For example, the sequence of events that occurred on the evening of February 26, 2012 at Sanford, Florida are easy enough to learn. The question is whether some people care to know what the truth is. Consider this mural shown at the Florida State Capital building, along with these comments by Robert Laurie at Caintv. 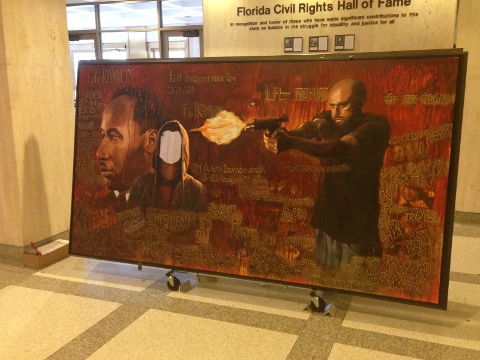 This weekend, a new mural entitled “We are all Trayvon Martin” was unveiled inside Florida’s Capitol in Tallahassee.  It’s a lovely piece of work, featuring a man shooting a hooded figure in the back of the head.  At 10 feet long, there’s also room for the bleeding visage of Martin Luther King Jr. and the words “we are all Trayvon Martin” in multiple languages.

Apparently, that’s supposed to bring together the peoples of many nations. …or something.

Many have speculated that the shooter is supposed to resemble George Zimmerman. That seems unlikely though, since Zimmerman would have been portaryed with a broken nose, and a head that was bleeding after being repeatedly slammed into the pavement. Clearly, this is a high-quality work of art, and the painter would not have overlooked those important details.

In place of Trayvon’s face, Miami artist Huong has inserted a mirror, so you can see what it would look like if you were being shot by an unnamed assailant who you had not physically attacked in any way whatsoever.

That this was unveiled in the State’s Capitol building?  Simply unbelievable.

This mural is simply a lie. George Zimmerman did not shoot a fleeing Trayvon Martin in the back. Either the artist couldn’t be bothered to make the minimal effort required to learn what actually happened or simply doesn’t care what the facts are so long as the narrative is pushed. It seems to me that an awful lot of trouble could have been averted if the media had done their job and reported the facts instead of trying to fabricate a morality play on the state of race relations in America.