Here is a cartoon in USA Today that neatly illustrates the dilemma I feel about the two frontrunners for the Republican nomination. 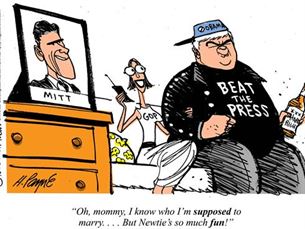 I feel like a woman who must choose between two lovers. Mitt is the nice, dependable boyfriend. He seem to be the steadier, safer of the two. Newt is the bad boy. He is more exciting, but maybe more dangerous.  I should prefer the safer choice. But, I keep having the nagging feeling that these are not the times for safety.

Meanwhile, Ann Coulter has been spending the last few columns promoting Romney. She clearly has no use for Newt Gingrich. She makes a good case but the truth is that neither man is clearly superior in terms of Conservative credentials or even, I think, electability. Coulter is right in noting that Gingrich is far more the Washington insider than Romney, but that isn’t really the point. Romney is the clear favorite of the Republican establishment, whoever that might be exactly, simply because they feel he is more electable. They may well be correct, but they really haven’t had a stellar record in picking winners in the past.

Coulter concludes her column with this observation.

Romney is the most electable candidate not only because it will be nearly impossible for the media to demonize this self-made Mormon square, devoted to his wife and church, but precisely because he is the most conservative candidate.

No, it won’t be impossible for the media to demonize this Mormon. The Mormons have a number of beliefs and practices that to non-Mormons seem weird or even cultish. There are certain aspects of the history of the LDS church that are not very positive. Something like that could perhaps be said of any religion, which is why decent people today do not mock other peoples’ religions. The liberals in the media feel no such decency. The only religion they are reluctant to criticize is Islam and that is out of cowardice. They have never forgiven the Mormon church for supporting Proposition 8 in Califoria This is, of course, no reason not to vote for Romney, but if he ends up being the nominee, we had better be prepared for media exposes of the Mormons and late night comedians making jokes about magic underwear.

Also, for a look for what might have been, check out Mitch Daniel’s response to Obama’s State of the Union address.

I wish he had chosen to run.